Cricket stars have millions of fans all over the world. People are willing to stand in cues for hours just to catch a glimpse of their favorite opening batsman or to get an autograph from their much loved speedster. Indian cricket has experienced a lot of success in recent years and the team’s fan base off late has increased astronomically. With a billion plus population at home and hundreds of millions overseas, the fans just keep coming.

Gautam Gambhir is one of the star batsmen in the Indian lineup. The left-handed opening batsman is not only handsome with his cover drives; he also has got a great personality. He was an instrumental part of the 2011 World Cup campaign of the Indian team where they were the eventual victors.

Gambhir knows how to carry his looks and it’s no surprise that tons of ladies are cheering at the top of the lungs when he is on the field. Recently the 33-year-old had some hair loss. This isn’t something any sportsman wants. With all the stress of the international game and the tough conditions these players get to play in, that is hardly a surprise.

While hair fall may not have a direct affect o the performance of a player, it can surely affect the confidence of a player like any other person. Such issues can affect the looks and the charm in a big way at the same time.

Making the smart call, Gautam decided to go ahead with a hair transplant surgery to get rid of the issue. Unlike many other celebs, Gambhir did not try to hide or deny the fact that he was having his hair restored.

Now that the procedure is done, the dashing opener is looking younger and has successfully restored all his charisma that he had before the hair loss. With his IPL team KKR winning almost every game, his graph as a sportsman as well as with the ladies is on the rise. 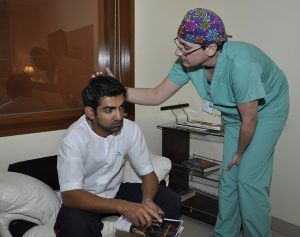 If you are suffering from hair loss and want to find a solution, fill in the form below. You can have a free consultation at Hair Transplant Dubai Clinic where you can understand the different options available for hair transplant. With our highly skilled and professional team of doctors, find out the best solution for you and get rid of the hair loss for good.