Smoking can Cause Hairloss & Premature Graying 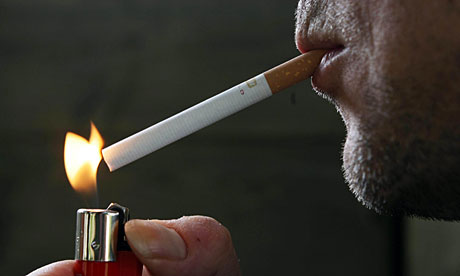 If increased risk of respiratory ailments, lungs cancer and cardiovascular diseases are not enough to make you consider quitting on smoking, than a warning about hairs may do the trick. Studies have shown that smoking can cause hair loss and premature graying. While there is no solid evidence to prove that smoking can cause premature hair growing or trigger hair loss, it is a well known fact that nicotine that you inhale while smoking a cigarette can contribute to premature aging. If an individual is predisposed to hair thinning and graying as he or she ages, premature aging can also have the same effect on the health of hair.

The toxins present in the smoke of cigarette, nicotine in particular, can disturb hormone levels and harm hair follicles. Tar and Nicotine present in the cigarette smoke affect blood’s ability to carry oxygen to different parts of the body, including the scalp. This limits supply of oxygen and other essential nutrients to the hair follicles and they become weak. Excessive and prolonged smoking causes the hair follicles to become miniaturized and ultimately fall out. A study published in the Archives of Dermatology in 2007 has proven that chain smokers are more prone to hair thinning and baldness.

Scientists have also been speculating since long time that smoking may accelerate premature graying of hair. A report in British medical journal conducted a research to prove a link between smoking and premature graying. They took a sample of 600 men and women. Half of the men and women were smokers while others were non-smokers. The smokers already have had signs of hair graying accompanied by hair thinning. After controlling and excluding other variables, the researchers found a significant and consistent correlation between smoking and early hair graying.

While evidence is yet to be established to prove effect of smoking on hair health, several studies suggest that smoking can cause premature baldness and hair graying – courtesy smoking’s ability to trigger premature aging. If you are also shedding hairs or experiencing early hair graying, and you are a chain smoker as well, this may be the right time to say it a good bye.

If you have already lost hair permanently and are seeking ways to regrow them, a hair transplant surgery may be worth considering.

What Does It Take to Properly Diagnose Hair Loss?

Irregular and thin eyebrows are frustrating you?